“The system of the wuxing forms an integral part of what A.C. Graham has called the “correlative cosmology” that had taken shape by the early imperial age under the Former Han. Various English translations have been attempted, but the “five agents” and “five phases ” are nowadays most commonly used by scholars.”—Christopher Cullen.

“With the fivefold scheme [compare with Yin and Yang thinking], however, the potential relationships are considerably more complex. The phases or agents are ordered in two ways: the “production” or “generation” sequence (xiāngshēng 相生) and the “conquest” sequence (xiàngkè 相克). It is easy to see the way the two sequences work, at least with reference to the natural entities after which the phases or agents are named. In the production order, Wood grows using Water; Fire can come from Wood; Soil (ashes) comes from Fire and (as all ancient people thought) Metals grow in the Soil; finally Water condenses on cold Metal. Turning to conquest, Water extinguishes Fire, Fire melts Metal, Metal cuts Wood, Wood (as in an ancient wooden spade) can dig up Soil, and Soil can dam up Water.”—Christopher Cullen.

“Like the Yin-Yang scheme, the wuxing emerged from the intellectual ferment of the late Warring States (403-221 BCE) in ways that are not easy to trace in detail. There were certainly alternative schemes stressing different numbers of categories. The Lushi chunqiu lushi (Spring and Autumns of Mr. Lu), which was assembled in 239 BCE, gives the first full and clear evidence of the scheme in action, and its application was developed further during the Former Han. Traditional attributions to Zou Yan (third century BCE) as a major innovator in wuxing thinking are probably baseless. At most he may have stressed the application of the scheme to the revolutions of political power, with each succeeding dynasty arising in connection with one of the phases or agents.”—Christopher Cullen, the author of article in the Encyclopedia of Taoism.

NOTE 1
Very often and good enough people understand the first principle, (1) “generation sequence” (xiāngshēng 相生), and the second, (2) “conquest sequence” (xiàngkè 相克). I would like to remind — lets call it — the third and the fourth principles, which I have met long ago while reading Sistematische Akupunktur by Porkert/Hempen, “control sequence” and “masking sequence”. For example, (3) Wood destroys Soil, but Metal controls the process, and (4) Wood destroys Soil but Fire masks the process.—Basil Lenkov.

NOTE 2
The images of the internet search (a keyword “五行”) can be quite impressive, but somehow very important aspects disappear behind the colors and volumes of the pictures. For example, a rare author can place Soil in the center with Wood and Fire as a Yang aspect, and Metal and Water as an Yin aspect.—Basil Lenkov.

NOTE 3
Once again, when Soil is in the center, we can see two axes: (1) axis of potency from Wood to Metal, and (2) axis of reality from Fire to Water. In general it gives us a lot of information for meditation because in such case we shall have Wood as potential action, Fire as real action, Metal as potential structure, and Water as real structure. Any table of words in cluster of five will look much better, beginning from the first column under Wood, the second under Fire, the third under Soil, the fourth under Metal and the fifth under Water. It looks classy, it looks reasonable, but it cannot be found so often online.—Basil Lenkov.

NOTE 4
The table of words organized as clusters of five online can be different in size, for a simple illustration “13 lines” table was chosen, but I have to say that in my collection I have “31 lines” of symbolic correlations, and there is a book which gives more than 100 lines. For those who read German: Eberhard W. Beiträge zur Kozmologischen Speculation Chinas in der Han Zeit ll Baessfer Archiv. 1933, No 16. My own precious source goes, as far as I can see, to Needham J. Science and Civilization in China, Cambridge.—Basil Lenkov, Sri Yantra Master.

“Wuwei or “non-action” means to do things the natural way, but not interfering with the patterns, rhythms, and structures of nature, without imposing one’s own intentions upon the organization of the world. The term appears first, and most prominently, in the Daode jing, where it is coupled several times with the phrase wú bùwéi 無不為, “and there will be nothing that is not done.””—Livia Kohn

“In the Zhuangzi, non-action appears as a more psychological mode and is a characteristic of spontaneity (ziran), the main quality of the embodied Dao. It means to be free in mind and spirit and able to wander about the world with ease and pleasure (see yuanyou), to engage in an ecstatic oneness with all-there-is. Yet another dimension of non-action evolved with the rise of cosmological thought in the Han. In the thought of Huang-Lao Taoism, non-action meant to be in perfect alignment with the movements of the seasons, the planets, and the times. Yin and Yang in their various alterations were the key pattern to follow and non-action meant less the not doing of something than the doing of the right thing at the right time. From this point onward, and in mainstream Chinese thought, non-action became a form of action, coinciding with the best possible action or yŏuwéi 有為 in both social and political practice.”—Livia Kohn

That is funny to remember the phrase ‘the doing of the right thing at the right time’ as it was said in the movie The Big Lebowski and of course, that is the thing which turns a man into the man, mensch. So, two different civilizations actually have so much in common recently and are so close to each other (almost as in the picture of world leaders in Brisbane, Australia 2014, with American and Chinese presidents in the center).

I though a bit, what I could possibly add to a couple of citations above, and you know what, I have decided to do nothing, 無為 (wuwei), just reread it again and get another second of agreement somewhere deep inside my heart again.

“The term tàijí 太極, or Great Ultimate (lit., “great ridgepole”), appears to have a Taoist origin. In the Mawandui manuscripts, the same notion appears as dàhéng 大恆 (Great Constancy).”

“The Great Ultimate is therefore the cosmic heart (xin) as both the pole star (jíxīng 極星) and the human heart. In the Xici (Appended Statements, a portion of the Yijing), the Great Ultimate is the prime principle of the world, and in the Xuanxue (Arcane Learning) milieu it is deemed to be cognate with the Emptiness and the Taiyi.”

“Zhōu Dūnyí 周敦頤 (1017-73), in particular, associated it with the Taoist term wuji (Ultimateness, Boundless, Infinite; lit., “without a ridgepole”) in the famous phrase wújí ér tàijí 無極而太極. This phrase can mean either that wújí and tàijí are one and the same thing, or that wújí comes first followed by tàijíi. While Neo-Confucians tended to endorse the first meaning, most Taoists adopted the second: for them the tàijí is the beginning of the world, but the wújí is the unknowable Dao itself.”

“The tàijí is the positive way of cognition and the wújí the apophatic one, two aspects that are complimentary in the divine knowledge, or knowing ignorance, both knowing and ignoring, neither knowing or ignoring. In the body, the tàijí is represented by the kidneys because the right one symbolizes the Great Yin (tàiyīn 太陰) and the left one the Minor Yang (or Young Yang, shăoyáng 少陽), hence the passage from Yin to Yang.”

Isabelle Robinet is the author of all citations here. There is a random order of them, just in the way I like to reread my synopsis from time to time to keep myself in the form. By the way, Encyclopedia of Taoism doesn’t practice tones’ settings but I do. 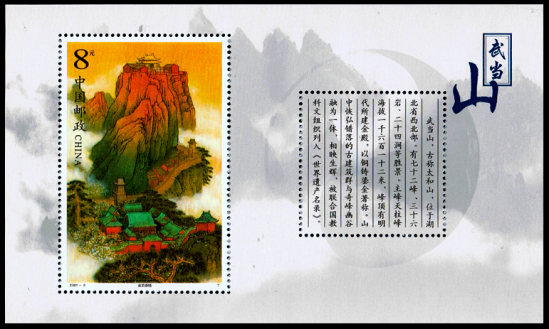 The author of article in the body of volume is Vincent Goossaert, I have just put tones and some Traditional Chinese glyphs in these two short quotes of him:

“There are mentions of this beautiful mountain site (1600 m high, located in the northern part of Hubei province) in ancient geographical sources, and there were Taoist ascetics associated with it. But Mount Wudang only came to national fame during the late thirtieth century, when it was recognized as the place where the martial exorcist god Zhēnwŭ 真武 (Perfected Warrior, or Authentic Warrior) had practiced ascetic exercises leading to immortality.”

“Last but not least, Mount Wudang 武當山 emerged, apparently during the mid-Qing, at the center of a distinct school of martial arts associated with Zhāng Sānfēng 張三丰, known as Tàijí quán 太極拳. Training in Tàijí quán, with either Taoist or lay masters, is now one of the major attraction of the mountain.”

“The term wú (non-being) usually has the same meaning as xū 虛 or “voide” and kōng 空 or “emptiness” (the latter term has a Buddhist flavor). The notion has different levels of meaning, however, which imply some distinctions.”

“Metaphysical or ontological “void.” The notion of a metaphysical or ontological “void” (or “emptiness”) is found in the Daode jing and the Zhuangzi, and later evolved under the influence of Buddhism. It negates the naive belief in a fundamental entity that lies behind existence and in an ultimate beginning (Zhuangzi) or foundation for the world, and states that the Dao, the Ultimate Truth, is invisible and inconceivable, and has neither form nor name. Everything is fluctuant, and every being is caught in a net of relations and depends on others, so that no one can exist on its own. And the whole world is one; it is a continuum whose parts are only artificially separated (Zhuangzi), so that fundamentally and ontologically nothing exists. Wu is the absolute Emptiness that logically lies above and before the distinction between negation and affirmation.”

“Emptiness consists of forgetting all that we have learned, all our striving and aims, and in letting things unfold by themselves, in ourselves as well as in the world. Do not interfere, do not do anything (wuwei), say the Taoist; let the Celestial Mechanism (tiānjī 天機) operate naturally and freely. The Taoist spontaneous way of acting and living (ziran) is the positive face of emptiness and non-intervention. Emptiness is seeing in darkness  and hearing silence within; it is not to be blind and deaf. It is not a disappearance of the visible, but a deliverance from it.”

These three extracts belong to a sinologist Isabelle Robinet, and I have to say, I like her style and seriousness in the not so easy approach to difficult terms’ interpretation which can be very unclear in time and space. She is the author of much longer article in the body of Encyclopedia, and this is a nice idea to keep reference books handy, and I do it and use my favorite volumes frequently enough. Another thing I do like to do as frequently as possible—just forget reference books and all about their existence at all and just succeed in my/your/our favorite exercises, whatever they are: yoga, daoyin, taiji quan, bagua, krav maga, throwing knives, baking, or mountain bike riding, or anything else, including classic music and sex (I mean classic music and sex in the same time:). Sometimes it is so good to keep ancient ideas not remembering them, following unconsciously but following.